Thank you to everyone who replied with helpful suggestions for Tony and Luanne and helped identify their garden problem as Slime Molds. Special thanks to Juanita Popenoe, Ph.D., County Extension Director in Florida for confirming this and to Alan Henn, Extension Plant Pathologist, Mississippi State University Extension, for the excellent article below. 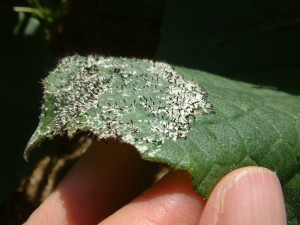 Slime molds are the cause of many panic calls to the Extension service and garden stores. “Everything was fine when we went to bed! But this morning, the yard (or a bush) is covered – with something!” The “something” may be gray, blue, yellow, orange, or almost any other color. It may even look like dog vomit or an intricate fan. A close look at the mass shows either small pores (pin-sized holes) or round balls. If you rub the mass between your fingers, a sooty-like powder covers them. The mass covering your plant is a slime mold. Slime molds live in areas with lots of moisture and decaying organic matter such as wood mulch or decaying trees. They are found all over the world, including such diverse areas as deserts and mountains. Mistakenly called fungi, slime molds are really myxomycetes. They act more like amoebas than fungi. Slime molds move like amoebas, extending finger-like projections (called a “plasmodium”). These projections pull the rest of the body along, letting the slime mold move as much as several feet per day. Slime molds may feed directly on organic matter, but they also may thrive on microorganisms such as bacteria. When they find something to eat, they first surround their food then swallow it. There are many genera of slime molds. The most common slime mold in Mississippi turf is Physarum, but the circular patches of yellow to pink growth in shredded wood mulched landscape beds is most often Fuligo sp.

When the slime mold is ready to reproduce or when conditions are right, it produces resistant spores that live until conditions again turn favorable. To ensure the spores reach as many places as possible, slime molds crawl up to the highest place around. Grass blades and other small plants are common “launching” platforms. There the slime mold forms the dusty gray, black, or dirty yellow ball-like masses with spores. You see slime molds most often in this stage. The entire surface of the plant or turf is often covered by the slime mold, creating a dramatic appearance. The ball-like masses produce small fruiting structures called “sporangia,” about the size of a pinhead, that grow perpendicular to the surface of the leaves. The sporangia are typically grayish-white to blue-gray or ash colored and contain purple spores. The wind catches the spores and carries them away from the plasmodium. Slime molds do not feed on living plants. They only use them for support during reproduction. The only damage they do to grass and other plants is to shade them from sunlight, which is necessary for good plant growth. The shade produced by heavy slime mold growth may cause the leaf blades to turn yellow. Slime molds occur during wet weather throughout the spring, summer, and fall. They disappear rapidly in dry weather. Slime molds on turf are frequently associated with poorly drained areas or thatch.

In most cases, control is not necessary. As soon as the area dries, the slime mold disappears. In unusual cases, the layer of crusty growth may become heavy enough to shade grass blades and cause yellowing. If this happens, or if you just don’t like the look of it, you can easily break up slime mold growth by sweeping with a broom, spraying the area with a garden hose, or spraying with a mild detergent solution (1 tablespoonful of liquid detergent per gallon of water), which will destroy the growth. You can remove slime molds from lawns by mowing and collecting the clippings, poling with a switch of bamboo, or by pulling a garden hose across affected the area. Slime molds are fascinating organisms and can make great science fair projects. Different types of decaying wood and forest debris can be collected, kept in a humid place or box and the different types of slime molds growing from them counted and related to their original environment.

What do you think? Click here to send your feedback >>

What do you think?